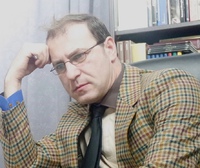 Teodor Stefaroi was born in Northern Roumania where he studied sculpture with Irimescu , Guguianu and then with Covataru at the National Fine-Arts University of Iasi. Actually, he was in Paris where he started painting as self-therapy.

Vassiliki V. Pappa:Teodor, you belong to the big art family. Tell us about your family...

Teodor Stefaroi: I am the last to come from a six-children family in the north of Romania, under the dictatorship of the 70s, in a charming little city at the confluence of nationalities, cultures and religions. At that time, culture was a very present activity in the life of people around me. I think that this was due to the several restrictions of the political regime. Although, I was the youngest of my family, I started very soon to read and write and later to try drawing the images in the books or on the walls around me, so I can tell that I draw "since always ". I had a really, really happy childhood, until the Time was able to adopt me too...

Vassiliki V. Pappa: You work and live in France, far away from Romania. What motivated you to choose to keep busy with the art world? How and when did you start the journey into this world?

Teodor Stefaroi: I 've always known that I am a citizen of the world and that the human spirit is the only state that recognizes the borders. But I confess that France has always attracted me more than other countries because of its history and its role in the evolution of the universal culture. So, one day, when I was 26, I decided to go to live in Paris, even though I've never been there and I didn't know anyone in that place. After that, a period of insertion started when the life's lessons followed one another. The maturing of an artist is a very strange and unknown processing, like his inspiration... The difficult passages were much more profitable for me, until 2013, when a deep drama pushed me to a personal reset. Then, only Art was able to bring me back to myself and to life. So, after that, I started painting by myself, as a self-taught, in my corner - by my school formation. I had a sculptor training. My paintings are the true story of my remission: I re-discovered the Art as a therapy and it worked!

Vassiliki V. Pappa: If you hadn't followed the path of painting where do you think you'd be now?

Teodor Stefaroi: I live Art as a whole. Art itself is a part of another more complicated set. In my teen-years, this curiosity pushed me to the music too. Actually, I have at home a little collection of almost every music instrument that I play from time to time. But my background passion has always been the Philosophy, so I think that without art, I could have been someone very passionate about the human condition, about the transformations of the individual through his existence and that of community, under the aegis of Time...

Vassiliki V. Pappa: What does painting mean to you and what influences have affected your inspiration?

Teodor Stefaroi: I will not advocate the Zen concept here. I am a fruit of "le devenir occidental" and I live the present of my time. However, I appreciate concepts like: intimate activity, meditation and privacy. So painting, helps me to re-trace the path between me and the others, to make more bearable this conflictual relationship. I sit in front of my easel only because I have something to say. Consequently I don't know what the fear of the blank page is. Inspiration still remains a fact that is difficult to be depicted and each artist has its own way to find it. To me, it's mostly like a need to describe to others situations that no words can express.

Vassiliki V. Pappa: How do you feel when your projects take some people away?

Teodor Stefaroi: All that we are, we are through others and everything that we do, we don't do it without others. We carry in us, especially when creating, our fellow. That's why I cherish so much the idea of the shared intellectual pleasure. Watching an art work, the spectator reconstructs, on his own way the initial unity between the creator and the universe including the spectator. That's why I still have a vague problem with the idea of merit in the Art. Initially, my art is a healing, a survival method. It doesn't matter so much to me how could it take people away, but certainly, when it happens, it becomes one of the purest pleasure.

Vassiliki V. Pappa: Who is your favorite foreign painter?

Teodor Stefaroi: Picasso, surely! I had a lot of trouble approaching his work for years... Only the retreat, despite what I could think, gave me enough perspective to begin to understand and really feel his way. And once the chemistry of the mind starts operating, it becomes to me an endless wonder! Picasso, it is merited...We must travel to the immensity of art history in order to understand him artistically because Picasso is the absolute renewal! And it's hard to find an artistic path today without falling into its wake. He is the one who has the most artistic perception of what plasticity is.

Vassiliki V. Pappa: How easy is it for a painter to be distinguished today? It is a matter of talent or more of a good promotion?

Teodor Stefaroi:The importance of public recognition for the artistic creation is a very old debate. We have already seen how this recognition can be harmful sometimes or how absolute masterpieces have emerged in the most total environmental ignorance. Today, due to the extreme popularization of creative techniques, we are witnessing an explosion of artistic poor quality production; this may discourage some and slow their progress, but clearly it is beneficial to true values. However, it is subject to the deepest motivation of each artist to define his own directions and goals that needs to pursue throughout his art.

Vassiliki V. Pappa: Has there been a critical moment that changed your life? What are the moments that marked you emotionally?

Teodor Stefaroi:There have been several very critical moments in my life and I have to say that it has been to me the best tool of knowledge and therefore of personal evolution! That moments, when no one can do nothing for you and you have to find within yourself the strengths to get by, these are many in a lifetime and that becomes unforgettable. It is one of the most recurring themes of my work and the background of most of the scenes that I recount: despair in front of own limits and those imposed by the forces around and by the tests of life. Since it's my laboratory of inspiration, it must remain, as long as it is possible like the roots of a tree: secret...

Vassiliki V. Pappa: Where do you find happiness in everyday life? Do you feel that you have actually found it? And if yes, how difficult is to finally discover it? What makes you saying that "life is beautiful" ? I refer to the moments that we use these words without any second thought.

Teodor Stefaroi: I think that despite the evidences that my intellect has been able to store over time, I am basically happy. A primal feeling, that becomes embarrassing or even uncontrollable sometimes. I could believe that disappointment, as a state of mind, comes more often in my relationship with life. This irreducible happiness, as a definite primary module, was the existential condition of my mind! When one can never be totally happy, nature must anticipate its mistakes by offering a happy nature.. 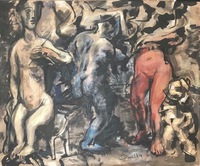